A Tale of Two Mothers 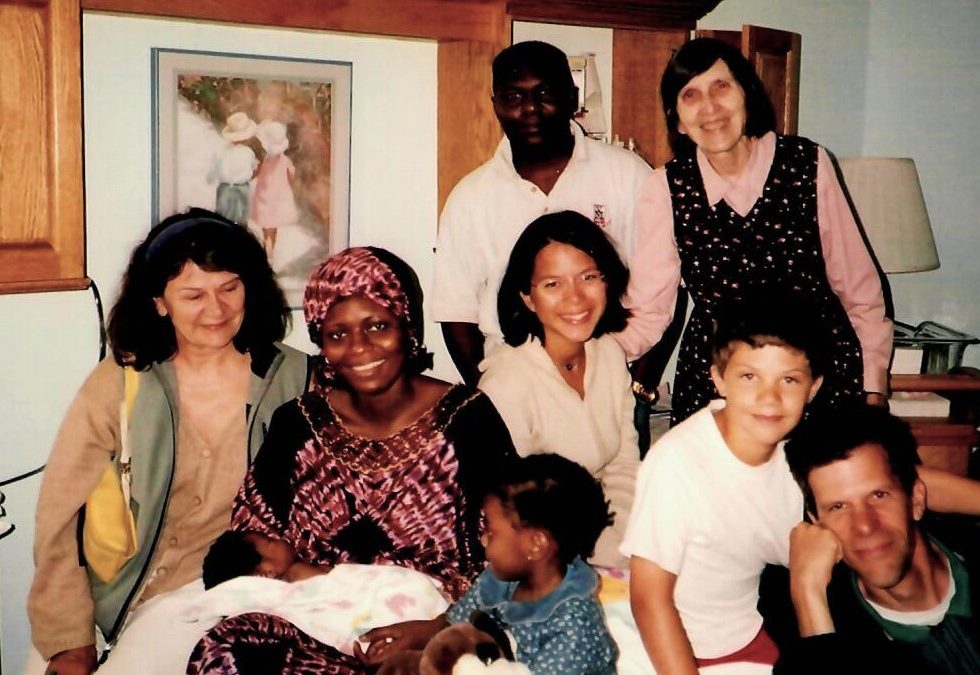 Christiane Donahue and Marie-Claire Tonoki—though decades apart in age—shared a history: both fled war-torn homelands to begin a life in the United States. And when the two mothers met in Northfield, Vermont in 2002 through the Good Beginnings Postpartum Angel Program, they formed a special bond.

At age 14, Christiane became a refugee during World War II. She and her family fled France, traveling through Spain and Portugal to reach one of the last passenger ships headed for the US, and landing in New York a day after the bombing of Pearl Harbor. Christiane had survived; now she had to find a home.

Years later, in the 1990s, Marie-Claire became a refugee when ethnic violence broke out in her home country of the Democratic Republic of Congo. Over four million people were forced to flee their homes and start anew. Among them were Marie-Claire, her husband, and their young child.

They found themselves in Northfield, Vermont when Marie-Claire’s husband accepted a job at Norwich University. He was settling in nicely, learning English on the fly at work. For Marie-Claire, who had left a well-established career in the Congo, the adjustment was harder. She was trying to preserve their native Congolese language as well as their French, in addition to learning English. She was expecting her second child, and the first had special needs. Marie-Claire and her family had survived the journey, but now she needed to build a home.

Decades earlier, Christiane settled into a new life in America: she married in 1953 and raised six children. She stayed busy with her career: graduate school (twice), teaching French, translating for the United Nations, becoming a photojournalist, starting local newspapers with her husband. She and her husband relocated several times for business reasons, so Christiane refined her ability to fit into new places. In the early 90s, her husband said he wanted to retire in Vermont, where his family had roots, so off they went in 1992. Fifty years after coming to the US, Christiane yet again found herself making a home in a new place: Northfield, Vermont.

Activities that filled her busy adult life were not readily available. Christiane did not have deep ties in Northfield like her husband did. And they lived up on the hill, not in town. She needed a path into the community. She found it with Good Beginnings of Central Vermont, founded in Northfield in 1992. Anne Donahue, Christiane’s oldest daughter, recalled that her mother met Good Beginnings founders, Sara Nevin and Maureen Larsen, shortly after her arrival.

Good Beginnings meant a lot to Christiane. It was a great way to connect, to end her isolation in a new town. At first, she supported families with short-term interactions like bringing a bag of goodies and sling for baby-wearing. Then she visited a family with their first baby, and afterwards, she and the family continued to see each other. And then she got a referral to the Tonoki family who, like Christiane, spoke fluent French! That was a breakthrough!

The Tonokis’ young child had learning disabilities and language challenges. When Christiane helped her get services at school, the Tonokis were grateful. Christiane got to know the family quickly: having a common language in a sea of English speakers built a bridge. The Tonokis visited Christiane at her home. Their bond really strengthened with the birth of the second child.

Marie-Claire gave birth at Gifford. She wanted a natural childbirth. Since Christiane was a photographer, Marie-Claire asked her to take pictures of the delivery. Christiane learned a lot about light adjustment from that experience. Black babies are born pale and darken up (white babies ‘pink up’), and her photos show that so well. By this point in their relationship, Marie-Claire and her husband felt so close to her that they named the baby Christiane.

For Christiane, whose own grandchildren lived in New York and Washington, D.C., the Tonoki children became her surrogate grandchildren. Since the children did not have access to their birth grandparents, they loved having Christiane in that role. They all exchanged birthday and Christmas gifts. Her relationship with the Tonokis gave Christiane so much, too. Between being a “grandparent” and communicating with other French speakers, she found a new home.

Two women—one from France, one from the Democratic Republic of Congo. They shared a common language and the experience of being refugees. One was pregnant; the other, a grandmother; each needed the other. Meeting Christiane through Good Beginnings helped the Tonokis on their journey as new parents. But Christiane also helped them navigate a new country and its language. And the Tonoki family gave Christiane purpose, affection, and fulfillment. Through Good Beginnings, both women found a caring community in their new home in Vermont.